How did I miss Fiona Apple’s ‘When The Pawn…’ 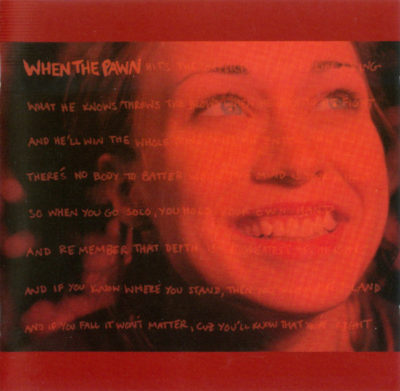 One of the benefits of quarantine, lockdown or isolation has been the newly found ‘time’ to indulge in culture now that socialising is on pause. It’s been a small joy in getting time to read that book, watch that show, catch up on that podcast or listen to that record.

Fiona Apple is an artist I’ve never found the time to really listen to or explore. With the exception of Criminal, ubiquitous on MTV for a period, or Fast As You Can, I’ve never delved into any of her tracks or albums in any meaningful way.

Despite the acclaim, the Grammy awards, the nominations and the recommendations from friends, Apple is an artist I’ve always put on the long finger.  That is now, no longer the case.

Inspired by the Guardian’s Listener’s Digest series, I’ve spent the past week listening to When the Pawn…, Apple’s second album. Released just over 20 years ago, I’m left wondering why I waited so long?

When the Pawn… – it has an unwieldy 90-word official title – is a gem of a record, intricate, multi-formed, full of attitude, vigour and emotional heft. Apple was 22 when the record was released, though When the Pawn… sounds the work of a more world-weary artist. It’s a minor masterpiece from the head and heart of a prodigious and precocious artist who is perhaps not as revered as she might be.

Apple produced the record with collaborator Jon Brion. Brion was also working with Eels, Elliot Smith and Aimee Mann around that period. You can hear a lot of the lushness Brion brought to those records in When the Pawn… The production here has a widescreen, cinematic feel to it. It swells around Apple’s piano playing, particularly on the album’s more sombre tracks such as ‘Love Ridden’ or ‘I Know’.

Much of When the Pawn... also brings the films of Paul Thomas Anderson to mind – particularly Apple’s singles ‘Paper Bag’ and ‘Fast As You Can’. It’s a trick of the memory that, although I could have sworn both featured in Anderson’s Magnolia, it’s not so. Perhaps its Brion’s production flourishes which breathe familiarity. Brion is a long-term Anderson collaborator and provided the score for Magnolia around the same time.

Anderson too was Apple’s partner at the time, directing all the videos for the singles on When the Pawn... Their relationship was never on my radar, but it’s been interesting to read how Apple dropped When the Pawn… just one month before Anderson stunned the film community with Magnolia.

How When the Pawn… passed me by may have something to do with the underwhelming (and poorly conceived) review NME – then my bible – gave it back in 1999. It’s perhaps also to do with how quiet Apple’s career has been since. In the 20-year period since, the New Yorker released only two more albums.

Her fifth album – and third since When the Pawn… – is due out this weekend (April 17) and is titled Fetch The Bolt Cutters (apparently a line from the Belfast-based TV thriller, The Fall).

By the sounds of it, she’s also got a backstory and a history of confronting difficult subjects that makes a deep-dive into the interviews she’s given as worth exploring as her work.

An artist who clearly ploughs her own furrow, I look forward to hearing and reading more.

How did I miss Fiona Apple’s ‘When The Pawn…’ was last modified: April 13th, 2020 by Steve Cummins