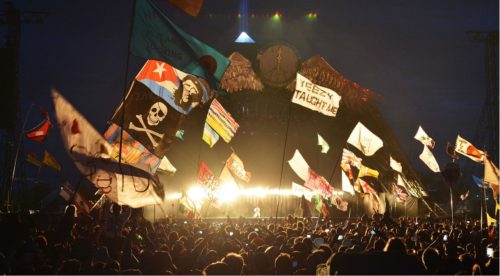 As each day passes the reality that gigs and festivals may not resume for some time is becoming an unfortunate reality. It got me thinking of gigs and concerts past, those nights in fields or sweaty venues it now seems we may have taken for granted. Memories of some of those nights seemed to have been dampened by alcohol and age, but they have resurfaced in recent days more vivid than ever.

Earlier this week, I was asked to share songs that I heard for the first time live and was instantly taken aback by. Songs that left a mark the first time I heard them performed right in front of me. There’s been more than a few.

I’m one of those whose ear perks up at the prospect of hearing the “new ones” at a gig. But Politik by Coldplay is one that immediately springs to mind, probably because of the context in which I heard it – a moment that felt like being a witness to something historic, at least in Coldplay’s story.

Politik is a song of firsts for me. The first time I heard it was at the Pyramid Stage in Glastonbury in 2002 – my first Glastonbury, my first Pyramid Stage headliner and on the first night of the festival proper.

It was a first as well for Coldplay – their debut headline set at Glastonbury (they would go on to headline three more times) and their first song of what proved to be a career-changing set. Glastonbury 2002 was the moment when Coldplay went from promising UK indie band to real contenders for the title of biggest band in the world. You can watch the performance with Politik at the start below.

Politik is also the opening song on their brilliant second album, A Rush of Blood To The Head. By the time Chris Martin and Co pitched up at Worthy Farm on the 28th June 2002 though, nobody had heard that album. It would be another two months before it would be released to ecstatic reviews and set them off on global domination.

Politik and the quality of writing on A Rush of Blood To The Head were as unexpected as Coldplay being announced as one of Glastonbury’s headliners in 2002. Coldplay’s debut album, Parachutes, had sold remarkably well, quietly shifting 2.7 million copies on its way to becoming the 45th biggest selling album in UK history.

Despite this, and a host of awards, their elevation to festival headliners seemed a little surprising, not least because it didn’t seem like they had the material to hold the attention of a huge crowd in a big field.

Parachutes is a fairly intimate and downbeat record better suited to bedrooms than big fields. This fed into the pre-gig conversation at Glastonbury around what to expect from their set that Friday night. I remember expectations being low and talk that centred around it being a night to see what Coldplay were really made of.

Politik then was a brilliant and brave opener. Perhaps the band’s heaviest song – and it isn’t particularly wall-shaking – I remember being struck by the force of its opening, the burst of lights that accompanied Will Champion’s pounding drums and Jonny’s Buckland’s driving guitar. It seemed to instantly dash away all thought that their new material was more of Parachute’s melancholy and it set the tone for the rest of the set that night. The songs outro was also a hint of the big sweeping melodies that were to come. As an opener it delivered real intent that the band were seizing to capture something in the moment.

Coldplay played five more new songs that night over a set that was perhaps one of the band’s greatest ever. Four of them, I also heard that night for the first time – Clocks, Daylight, God Put a Smile Upon Your Face and The Scientist – while In My Place had just been released as the lead single to their second album.

Three years later I’d again see Coldplay headline Glastonbury – another momentous performance. They played Politik again that night, complete with a tribute to the festival and the Glastonbury audience that still raises the hairs on the back of my neck when I hear it, the crowd wildly cheering each of Chris Martin’s off-the-cuff lyrics. See said performance above.

‘This is a new one’ – hearing great songs for the first time was last modified: May 6th, 2020 by Steve Cummins