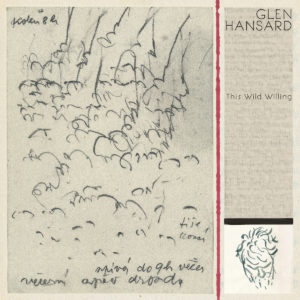 Opening with sampled drums over a muffled sound effect that eventually swells to a wall of discordance, Glen Hansard’s fourth solo album marks a welcome return to the more alternative, fearless and emotionally rewarding writing that marked The Frames at their creative peak.

This Wild Willing is the 48-year-old’s best record since The Swell Season, the 2006 collection of songs with Marketa Irglova that marked his first step away from The Frames and formed the basis for the phenomenon that became Once.

Since shooting to that international success in 2007, Hansard, to lean on the message of one of the standout tracks on This Wild Willing, Don’t Settle, has appeared at times to do just that.

Since Once, Hansard’s three solo albums and two albums as The Swell Season have seen him sink more into the mode of earnest troubadour. Nico Muhly, the US composer and Hansard’s friend, jokingly call him “Earnest Strum”. It’s a nickname in jest, yet there’s more than some truth to it. It’s a peculiar quirk that Hansard has found his biggest success making the least exciting music of his career.

It would be wrong to write off those solo records entirely. They are, of course, not without their moments, but they mark a steady drift towards the safe and the banal. Even Hansard has seemed to partly acknowledge this. Last year’s Between Two Shores, he has since said, left him “freaked out” and concerned he was “dialing it in”. He has responded in some style.

Hansard says that he set out to make an acoustic record with This Wild Willing before an unexpected meeting in Paris with a trio of classically-trained Iranian musicians, the Khoshravesh brothers, took the record in a more experimental direction.

Seizing the moment, Hansard decamped to Black Box Studios in the West of France. He invited the Khoshraveshs, along with Irish electronic musicians Deasy, Dunk Murphy and former Swell Season collaborator Marketa Irglova to join him. Together they conjured up This Wild Willing under the supervision of producer Dave Odlum.

The basis for that original acoustic record can still be heard in the finished result. This Wild Willing is an album filled with intense sonic invention on the one hand and more traditional folk flavours on the other.

The more traditional influence is there in the rolling, folk-flavoured Brother’s Keeper, Mary or album closer, Leave A Light. Those more structured songs sit neatly among the more sonically dynamic and experimental arrangements that make up much of the rest of the album. Here, Hansard is largely more concerned with mood and feeling than ordered composition. Five of the record’s 12 tracks stretch over the six-minute mark.

Opener I’ll Be You, You Be Me samples Queen and moves menacingly, gradually sweeping you up in the atmosphere of the record. The brilliant Don’t Settle – one of the best things Hansard has done – opens with sparse, hypnotic piano from Marketa Irglova before it morphs into the type of ferocious wall of noise reminiscent of The Frames’ Santa Maria.

Fool’s Game similarly builds from slow, delicate piano to a swirling whirlwind of forceful, distorted noise that brings Sigur Rós or My Bloody Valentine to mind. A gentle, operatic vocal in its closing third from Aida Shahghasemi closes out a gorgeous and expansive opening.

Throughout these bursts of fierce intensity, Hansard never sacrifices intimacy. His whispered vocal is front-and-centre in the mix, always close to the ear. It draws you close despite the huge sonic invention erupting around him.

The Closing Door and Race To The Bottom showcase the Khoshravesh brothers’ Middle Eastern influence. The latter wonderfully builds and rambles against lyrics of late-night jaunts through Paris, while the former is dense, menacing and hypnotic.

From here the record becomes more languid as Hansard welcomes in the aforementioned folk-flavoured songs. There’s room still for innovation, notably in the richly melodic Threading Water and the slow-flow claustrophobia of Weight of the World, Hansard carving out a soundscape that seems to mirror how depression feels.

It gives way to the beautiful, Good Life of Song, a hypnotic mantra that sees Hansard reflect on his muse. It’s another career highpoint and good marker for This Wild Willing.

At seven minutes long the record’s penultimate track, requires you to invest in it to reap its rewards. This Wild Willing asks likewise. This shimmering beauty of a record requires studious listening. It’s over 65 minutes long, but it’s worth the investment of time. We may look back on this as Hansard’s greatest achievement. Recommended.