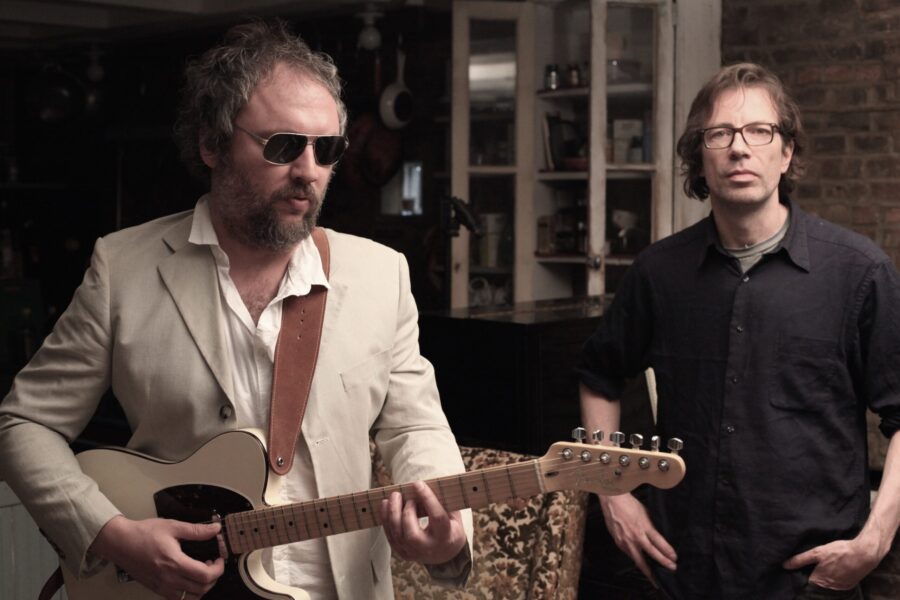 Perhaps it’s because he’s been based in the US for the best part of 30 years, but Ken Griffin remains one of the Irish rock scenes more under-appreciated songwriters. ‘Under-rated’ could well be his nickname.

Griffin has made a number of fine records over the years as Kid Silver, Favourite Sons, Rollerskate Skinny and, currently, as one half of August Wells.

In the interview below he signposts you to his suggested starting point for each of his previous guises. His 1999 Kid Silver LP – Dead City Sunbeams – would me my recommended start. It’s a record that was perhaps ahead of its time, a treasure trove of orchestrated pop that never got a full release outside the US but can be found on streaming platforms.

Griffin though remains best known as the frontman to Rollerskate Skinny, the 1990’s Dublin band often compared to My Bloody Valentine, Mercury Rev and The Flaming Lips. Their sound  met at the intersection of post-punk, shoegaze, indie and psychedelia and was best showcased in their 1996 Irish indie classic, Horsedrawn Wishes.

His latest record as August Wells couldn’t be further removed from Rollerskate Skinny. It’s another collection of piano-based songs mostly stripped to their core parts. There’s other instrumentation in there, but it’s unobtrusive with the focus very much on Griffin’s lyrical vignettes for the downtrodden and John Rauchenberger’s piano.

For my money, it’s the best August Wells record yet and one that will hopefully find an audience despite Griffin and Rauchenberger being unable to bring it on tour (yet) due to the pandemic.

Ken Griffin recently took the time to answer some questions for me about his 30 years in music and the new August Wells album, No More Operators.

Ken, you’ve been involved in many great records, bands, and incarnations over the years – if you were to point people to the best example of your work, what would it be and why?

Best example of my work? Thats a little difficult, because each project I have done is, certainly musically, quite distinct. So for Rollerskate Skinny I would say Horsedrawn Wishes, because I broke myself creating that record. Kid Silver only did one album Dead City Sunbeams, so I would have to say that one. Favourite Sons: I would say the second album The Great Deal of Love. August Wells: Madness is the Mercy is probably the best introduction to that band, but obviously the latest album No More Operators, is the one freshest in my mind.

Why did you get involved with making music in the first place? Has it lived up to expectations?

Initially, hearing bands like The Velvet Underground made me feel less alone and gave me a sense of hope. My experience with the music industry has been up and down, playing everywhere from Radio City Music Hall down to 15 people at the back of a bar and everywhere in between. As far as it living up to my expectations? Music has quite factually changed and saved my life many times. Music to me feels more real and less daunting than reality. It provides me with safety, comfort, joy and great challenges. I still feel I am only getting close to understanding it and its power.

How would you describe No More Operators? Was there particular themes or feelings that you sought to capture on that record?

Themes are not something I am aware of. My lyrics tend to be as honest a response that I can have to my daily life and experience. I might get one line from an event or observation, then I try to expand on that initial inspiration as honestly as I can.

What’s the best piece of advice you got when you were starting out?

Probably from Danny Fields who signed The Velvet Underground, The Stooges, The Doors The Ramones and many more. He said simply, “don’t listen to anyone”. I wish I had listened.

What advice would you give to other songwriters or those who want to be in a band or make music?

Read, read, read, listen, listen listen. Absorb as much greatness as you can, then let it all go and work as hard as you can to find your voice. Take responsibility for the effort, everything else is a game you will either win or lose.

A lot of your lyrics on No More Operators could almost serve as short stories. Do your lyrics develop quite separate of the music or how does the writing process work for you?

I don’t think I write story songs per se, but sometimes I like to give the impression or feeling of a story. A lot of songs I have liked down the years have felt like stories, but on closer examination they tend to be a little more free and abstract. I suppose the skill is to make it feel connected without it having to be. Sometimes the structure, or melodic structure, can give the impression of a story, but one you can return to and find new things each time.

Do you still have to do other stuff to make a living? If so, what stuff? Does this frustrate you?

I have bartended for 20 years, but at night time in New York City. So there is endless inspiration and it forces me to listen and connect with people. Right now, I work at 11th St Bar, which is full of characters, from poets to painters to mail men and nurses. It’s a rich experience for a writer.

Have you any desire to revisit Horsedrawn Wishes ahead of its 25th anniversary next February?

I am looking into it. It would be nice to celebrate the anniversary, because it’s amazing how many people still talk to me about that record.

What are your memories of making that record?

Vague, because of so many years passing. I do know it was the record I trusted myself most on, and one I didn’t compromise in any way. Youthful arrogance maybe, or I just had a very clear feeling of what I wanted. The friends you lose trying to remain authentic, probably were not real friends to begin with. I had a vision and didn’t stray from it, which is harder than it sounds, especially when you are as brutally sensitive as I am to people’s opinion. But I am glad I went through it.

With no upcoming August Wells gigs in light of the pandemic, have you and John at least found the lockdown periods creatively fruitful?

I have probably written more in the last 6 months than ever before. It certainly separates out people who need to create and people who just do it as something to do.

August Wells new album, No More Operators is out now on FIFA Records. Buy it on vinyl and download via Bandcamp or from all good record stores