Some Might Say: 25 years on from the moment Oasis went supernova

25 years ago this Friday (24 April), Oasis had their first ever number one single with Some Might Say and the unstoppable behemoth that was (What’s The Story) Morning Glory began.

Some Might Say marked another strident step forward for Oasis, a single full of attitude, verve, vigour and nonsensical Noel Gallagher lyrics that somehow sounded perfect when sung aloud passionately by the masses (“Some might say you get what you’ve been given/ If you don’t get yours I won’t get mine as well”).

It ended Take That’s four-week reign at the top with Back For Good, as the Britpop train – in the wake of Blur’s clean sweep at the Brit Awards that February – well and truly took masses of UK indie bands into the mainstream.

Looking back, what’s incredible is the run Oasis were on. Some Might Say came just eight months after the release of Definitely Maybe and four months on from their Christmas Top 3 hit, Whatever. The band were aping the 1960s bands who, when on a hot streak, kept the studio engineers busy, often releasing two, even three albums within a year or so.

Some Might Say arrived in another brilliantly puzzling Brian Cannon sleeve design (fun fact: the woman stood under the watering can is also on the cover of Ash’s Goldfinger single) It was also possibly the best track-for-track single released that year, containing Talk Tonight, Acquiesce and Headshrinker as its B-sides. The only single released in 1995 that might have rivalled it was the release of Wonderwall that October, with its B-sides of The Masterplan, Round Are Way and The Swamp Song. 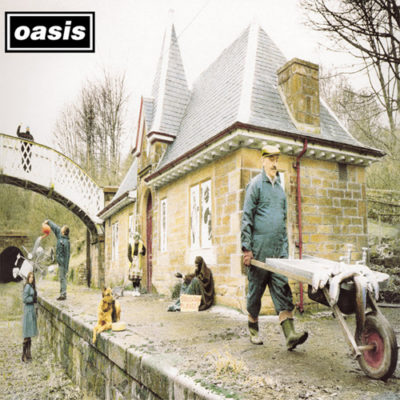 It seems bonkers now that The Masterplan, Acquiesce and Talk Tonight – all tracks that made Oasis’ Stop The Clocks best of – couldn’t find a place on (What’s The Story) Morning Glory.

Alan McGee had asked the band to make Acquiesce a double A-side with Some Might Say. Noel rejected the idea, apparently because he was unwilling to have to write another B-side and record it.

Such reluctance is perhaps why Oasis never released two CD versions of the one single. The 1990s was an era when bands often did this in the hope diehard fans would buy both versions for the different B-sides and, in the process, boost their acts chart position. It’s one of the reasons why Oasis would months later lose out to Blur in the Battle of Britpop.

McGee also later told tried to get Noel to hold back The Masterplan, rightly arguing it was “too good” to be a B-side.

“The singles had to have three B-sides and I was always coming up two songs short,” Gallagher told Music Week late last year. “I remember writing The Masterplan at home in Camden and then going to Maison Rouge [Studios] in Fulham the next day and playing it on an acoustic guitar to silence. I’d write The Masterplan, Talk Tonight or Half The World Away and nobody would say, ‘Do you want to hold that back?’ It’s only as the years have gone along that I’ve realised that was mental. But we were all mad in the ’90s – Alan McGee was off his tits and he was running the label.”

Those B-Sides are what also fed into Oasis’ mystique. All of their singles on their first two records – and to a point into the Be Here Now-era – were incredible. Many marvelled at the time just how good the band must be if they could discard such songs willingly.

If Some Might Say was the first official taste of (What’s The Story) Morning Glory, then B-Side Acquiesce also gave us another peak into the band’s second album with its intro containing Noel’s demo recording of Morning Glory with the guitarist singing the chorus line that would become the title for the upcoming record.

Although Gallagher clearly had the songs earmarked for the album, recording for (What’s The Story) Morning Glory didn’t actually begin until a few weeks after Some Might Say hit number one and the band had replaced Tony McCarroll (Some Might Say was the last single he appeared on) with Alan White.

White’s first job with the band was on Top of The Pops before the album sessions began weeks later, in late May 1995 at Rockfield Studios in Wales. The first day of recording would end with White driving Noel Gallagher back to London after a bust-up with his brother involving a cricket bat.

On July 22, supporting R.E.M at Slane Castle, the group gave Irish debuts to five tracks from the Morning Glory-era – The Swamp Song, Acquiesce, Hello (which had to be stopped due to an over eager crowd – myself among them – moshing and getting pinned too close to the stage), Some Might Say and Don’t Look Back In Anger. The latter instantly sounded a classic and lived up to the hype that had quietly began to build in dispatches from the NME by the few who had then heard it.

The next time Oasis played Ireland was almost a year on from their first number one single with two incredible, celebratory shows at The Point Depot on 22 and 23 March 1996.

By that stage Oasis were unstoppable. (What’s The Story) Morning Glory went on to sell 22 million copies and became the fifth biggest selling album of all time in the UK.

Just over a year after Some Might Say, tickets went on sale on 11 May 1996 for their mammoth Knebworth shows that August where they played to 250,000 people over two days. 2.6 million people applied for tickets. The band could have sold out the venue for two weeks solid.

Some Might Say: 25 years on from the moment Oasis went supernova was last modified: April 21st, 2020 by Steve Cummins