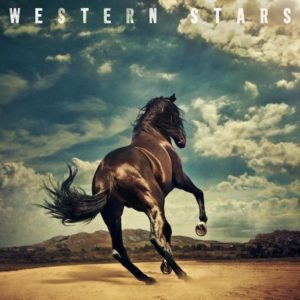 30 years ago, Bruce Springsteen was going through upheaval. It was 1989. Springsteen, at his commercial peak, had just come off the Tunnel of Love world tour. He was beginning to cut ties with his past. That year he divorced his first wife, turned 40 and left New Jersey for California. He also cut the ties that binded him to the same musicians most of his recording career by dissolving the E-Street Band.

This period of adjustment features in Springsteen’s illuminating 2016 memoir, Born To Run. At the time, he says his mind was racing, filled with anxiety.

To try and “take the edge off my heebie-jeebies” he spent his days on the West Coast riding his motorbike through the valleys and deserts east of LA. As that freight train ran through the middle of his head, he’d take off on 300 mile round trips into the San Gabriel mountains, the Mojave desert and the Angeles National Forest to “momentarily silence the ongoing racket inside of me”.

On one trip, for his 40th birthday, he took off on a 2,000-mile, 10-day trip deep into the America of Hollywood Westerns. From California, he rode dusty desert roads through to Arizona, Nevada, Utah and Monument Valley before coming home to Los Angeles to break-up the E-Street band and properly begin the solo part of his career that has since flowed intermittently.

That image of Springsteen – riding his motorcycle through “the location of some of my favourite John Ford films” while trying to escape himself by cutting ties with his past – springs to mind listening to Western Stars, his 19th solo album and his first album of completely new material since 2012’s Wrecking Ball.

This is a record fuelled on escapism, both in the feeling derived from Springsteen’s chosen musical palette and the stories that frame its lyrical content. It is a record filled with characters moving forward only to find their futures tethered to their past. Little new there then in respect of his oeuvre and, in a lot of ways, Western Stars is vintage Springsteen – majestic, powerful and cinematic.

Much has been made about this album marking a radical musical shift, one where Springsteen has swapped the sound of the E Street Band for an orchestra. The truth is its really no great shift at all. Long-time Springsteen fans will find much familiar here. The sweeping strings that underpin the record’s vivid lyrics echo New York City Serenade from 1973’s The Wild, the Innocent & the E Street Shuffle. Western Stars’ optimism (and indeed its themes) bring to mind 2008’s Working On A Dream, particularly that album’s opening track, Outlaw Pete. Elsewhere here, on Sleepy Joe’s Café, Springsteen continues to draw on the Irish folk-influenced party sounds that he has shown such a penchant for since 2006’s We Shall Overcome: The Seeger Sessions through to 2012’s Wrecking Ball.

It’s not to say though that he isn’t experimenting with something new here. But his shift in direction sounds less radical and more of a natural progression for a performer now in his 70th year.

The musical palette he has bathed the songs of Western Stars in certainly draws liberally from the early 1970s orchestral pop and country-tinged sound most associated with Glen Campbell, Jimmy Webb, the Mamas and the Papas and Harry Nilsson. The songs of that era are noted for their lavish and luxurious production, but they are also exquisitely crafted songs. There arrangements never over-power the song they serve. This isn’t lost on Springsteen who has taken as solid a batch of songs as he’s produced in recent years to experiment this sound on. Songs like Tucson Train, Western Stars, The Wayfarer or Hello Sunshine are robust enough to strip away the strings that swell around them and still sound solid.

Lyrically, he is on familiar ground throughout, taking solitary characters filled with regret and giving them the promise of a second chance in the expanse of America’s wide-open spaces. Each of the 13 tracks are a vignette where the themes are largely travel and reinvention – “Same sad story, love and glory/ Goin’ ’round and ’round/ Same old cliché, a wanderer on his way/ Slippin’ from town to town,” as he sings on The Wayfarer.

That song also explores the mental health themes evident through all his work – “Some folks are inspired sitting by the fire, slippers tucked under the bed/ But when I go to sleep I can’t count sheep for the white lines in my head”. Or take recent single Tucson Train (“To that voice that keeps me awake at night/ When a little peace would make everything right/ If I could just turn off my brain”) where salvation, or at least peace of mind, is only found in honest labour (“Hard work’ll clear your mind and body/ The hard sun will burn out the pain”).

More than anything though, these songs linger longer in the mind than anything in Springsteen’s recent output, certainly since 2002’s The Rising. This is perhaps because, for all the beauty of the orchestral flourishes, pedal guitars and sweeping soundscapes, the chosen arrangements ultimately push the focus onto Springsteen and his vocal. If at times he could bed in and get lost in the sound of E Street, here he is barer than ever with everything built around him.

It has forced him to really hone the vocal melodies of these songs, which are a real success of the record. There are gorgeously stretched melodies – such as on wistful opener Hitch Hikin’ or the soaring There Goes My Miracle – and subtle vocal hooks, such as in the languid way he lets certain words ebb and flow on Tucson Train or Sundown.

Western Stars isn’t an immediate hit. It takes a number of listens to weave its magic, but when it does the songs lodge long in your sub conscious. In the latter stages now of his life’s work, Springsteen has made another revealing touch-point in a wondrous body of work. Long may he continue.